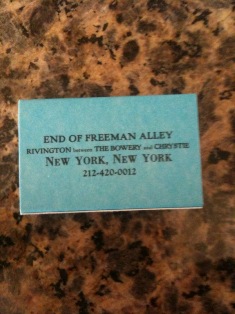 Just got back from NYC. It was my first visit there in over a decade, which is far too long.

In all realms, Gotham has this tendency to defy conventional logic and, in doing so, redefine it.

I ate at Freeman’s Restaurant on the Lower East Side on Friday night. They do “new American” cuisine, which is all the rage these days. It is perfect food for the current zeitgeist – kinda feel good-ish cuisine with gourmet twists added.

Conventional logic holds that a restaurant be “findable.” That it be on a street with traffic and possess an actual address. Freeman’s has no address (as the above photo indicates). It is “down an alley.” This, though, is part of the cachet and is likely a part of many conversations about the restaurant.

Most restaurants like reservations. Freeman’s doesn’t take them. But, because the whole customer experience there (the food in particular) is SO next level, it doesn’t need to.

Freeman’s defies basic rules of the game successfully because it provides superior value.

“But we’re communicators not restauranteurs,” you say.

Indeed, but don’t some of the conventions and “en vogue” beliefs in PR seem a tad dubious?

What do you think about the current “norms” and accepted wisdom in the PR game?