Hey Slugger, what you say matters too 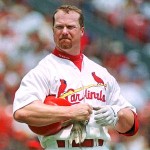 I saw this excellent report on the Communications strategy Mark McGwire and the St. Louis Cardinals are employing to deal with his prolonged and willful use of steroids.

McGwire is working with former Dubya Bush press secretary Ari Fleischer to mitigate negative media coverage and rehabilitate his tarnished image. I assume the good folks at MLB are praying to all manner of Gods that Fleischer can pull one out of his buttocks here. Steroids have truly been the gift that keeps on giving for professional baseball.

Though I am definitely no Republican, I have always had respect for Ari Fleischer. He had a terrible communicator of a President to work with and bad policies to try and shine up. All things considered he did pretty well during his tenure.

The strategic design of the media roll out on the McGwire announcement is textbook. After a 3 pm release Big Mac did no less six interviews, all with relevant or major media outlets. Fleischer’s git ‘er done approach to managing this news was solid. Why?

In a situation like this you want to dispense all news at once and get the word out unequivocally. Yes, the story has legs – plenty of em – but they hit every outlet that really matters with one on one interviews right away. This is making the best of a bad situation.

I agree with the above NY Times piece that this was much better than last year’s prolonged A-Rod “I juiced too” rollout.

Here’s the thing: Though Fleischer should be credited with a great media rollout strategy this turd won’t shine. In part this is due to Mac’s previous statements where he said he “was not here to talk about the past” to the Senate. A great rollout strategy is but one piece of the puzzle in crisis comms. Accrued or perceived credibility matter, and on thus area Mac was weak.

More important though is what gets said. On this variable Big Mac’s performance was an egregious failure. He stated, ” I did this for health purposes, there’s no way I did this for any type of strength use.”

The “I did this for health” angle went further.

During the mid-nineties, I went on the DL [disabled list] seven times and missed 228 games over five years. I experienced a lot of injuries, including a ribcage strain, a torn left heel muscle, a stress fracture of the left heel, and a torn right heel muscle. It was definitely a bunch of miserable years, and I told myself that steroids could help me recover faster. I thought they would help me heal and prevent injuries, too.

Mac’s message nullifies any other great strategic moves. Pleading health is, simply put, a cop out. This is an instance where excuses are unnecessary and people just want to hear the guy man the hell up and own what he did.

The lesson for PR people and communicators is clear. The greatest strategy and roll out plans will do little if the message you are delivering is shitty. Pretty obvious eh?

It is, but I know in my professional career many clients and employers have been far more interested in the strategy and rollout than actual message content. The McGwire debacle supports the notion that what you say matters as much or more than when and where you say it – especially if you have a piece of the news that everyone and their mother is going to want to cover.

Do yourselves a favour and remind your employers/clients of this.