You, Me and Responsibility 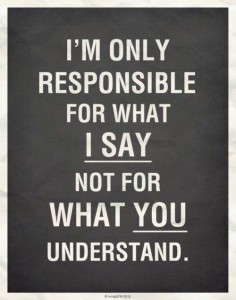 image via Design You Trust

The above image could not be more wrong.

But it sums up a problem most of us both endure and propagate every day.

This picture speaks to an attitude that costs billions a year. An attitude born of a messed up education system that tells us, from a young age, “If you don’t get it, it’s your problem.”

Anyone who subscribes to the (ill)logic embedded in the above image is destined for failure. It might big, it might be small, but they’ll fail and they’ll have to take steps to fix the failure. While they’re busy rectifying, others who took the time to communicate properly get the chance to run circles around them.

Thankfully, you already know that any time we communicate we are entirely responsible for what the receiver takes away. The moment we abdicate that responsibility we enter perilous territory where things go wrong. Maybe really wrong.

I don’t give a damn what context a message is being sent in or its purpose, the onus for understanding is always on the sender.